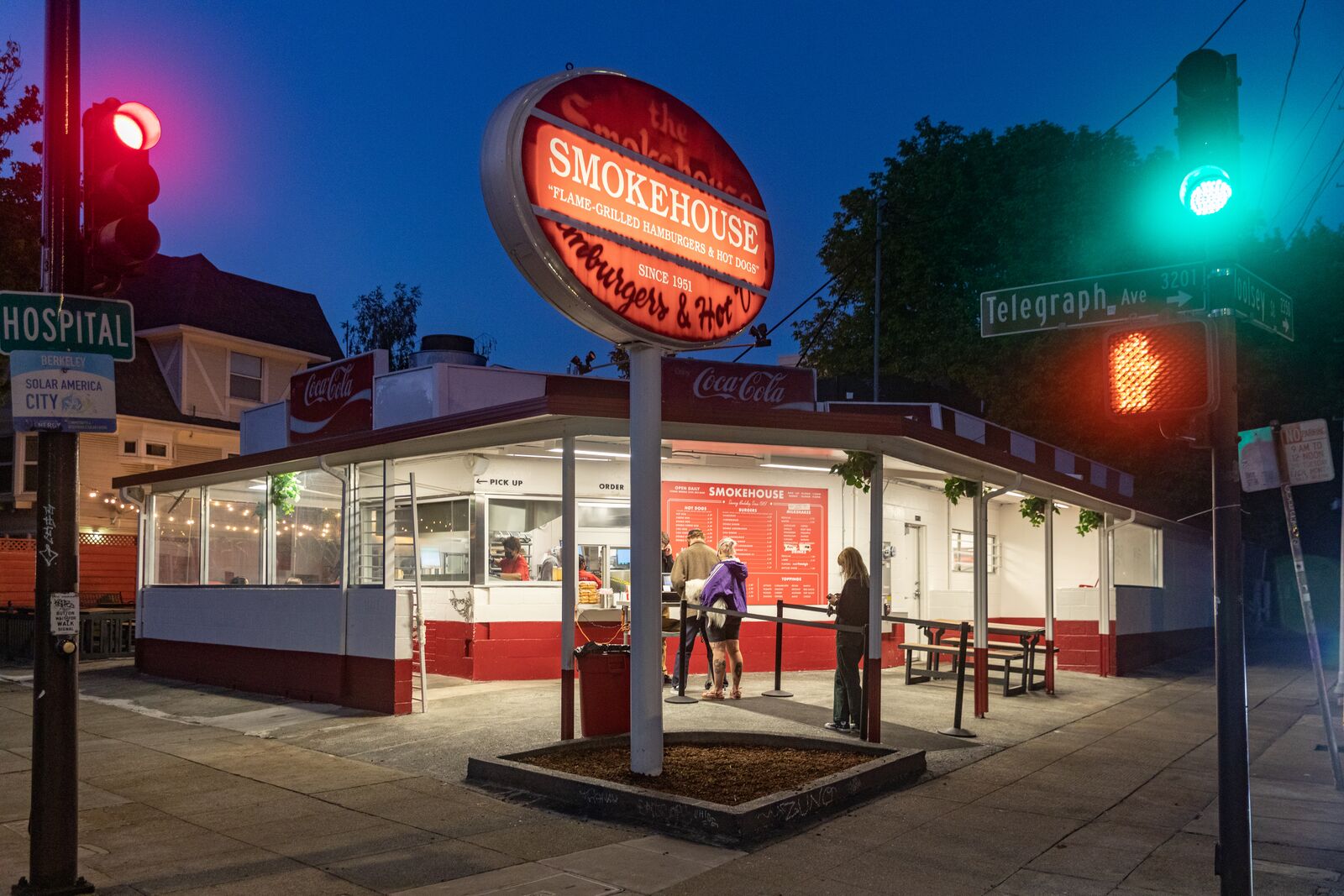 NOSH — Is it possible to make almost everyone happy, but never really change? The Smokehouse plans to find out.

Ask around about the restaurant and you might think it’s a mythical place rather than a brick-and-mortar burger joint on the corner of Telegraph and Woolsey in Berkeley. Nobody seems to quite know its story. “I think it’s owned by a family,” you might hear. “My grandmother went there while she was in labor with my mother in 1960,” another local might tell you.

And yet another: “Some of my earliest memories are of being walked to Smokehouse by my grandmother,” a Holocaust survivor who called it “Schmokey House” in the 1970s.

From its glowing red sign, hard to miss from even blocks away, you’ll see it first opened 70 years ago, in 1951. From photos, you can find out that the price of a burger has risen just over $1 in the last 15 years, and the price of a soda, about 50 cents. And, as anyone who frequents the Oakland-Berkeley border knows, it was hit with a small fire in early 2019 and remained shuttered for long enough for people to assume it wasn’t coming back.

But who’s actually behind the enduring, iconic spot? Enter Sally and Shakaib Shaghasi, the Pleasanton-based mother-son duo that keeps The Smokehouse’s chimney billowing.

Sally’s brother was working at the restaurant and attending school in the early 1980s, and in 1983, she got sponsorship to immigrate to the United States from Afghanistan. She got a job at The Smokehouse “with no ambitions to ever do anything other than work and make a living,” according to her son.

About 17 years later, in 1999, the restaurant’s original owner Jean Kisner “randomly” offered Sally the opportunity to purchase it. Kisner’s family still stops in.

Meanwhile, Shaikaib was born in 1993. “I basically grew up as a product of the store in the back room while my mom was working,” he told Nosh. When he reached high school, Shaghasi began to actually get his hands dirty. Then at 17, he got to make his first executive decision: to start accepting credit cards.

“That’s when the business took off,” he said, estimating that sales increased by 30% as a result. Next came mobile orders through apps, and his input grew from there. Sally, still the sole owner, continues to be a decision-maker and cook – during the night shifts. Shakaib is now the general manager.

Things went smoothly until the fire, a pivotal moment in ushering in The Smokehouse’s next phase. Initially estimated to reopen in about two weeks, it was closer to two years until the restaurant was back up and running. While the fire damage was relatively minor, it highlighted a need to bring the old building up to code, which in turn opened the door to getting the restaurant primed for the long haul.

“That gave us an opportunity to be able to remodel the whole building and set it up for many, many more generations to come, because that’s our intention here,” Shakaib said. “We don’t want to change anything at the store and we want to keep it as close to how it should be forever. … So we wanted to make sure we maintain that and not change who we are because of the fire.”

He added that there wasn’t any one issue in particular that slowed down the reopening. It just took longer than expected to get insurance details worked out and designs finalized and approved. And then, of course, the COVID-19 lockdown didn’t help.

“Everything took the time it needed to take,” Shakaib said, with the grand reopening finally happening last December.

With changing tastes and trends, he’s now finding room to make “common sense” tweaks while trying to stay true to The Smokehouse’s roots. Most prominently, there’s now a mural by Oakland’s Good Mother Gallery directly across the street – on the north side of Telegraph Hardware – which helps combat periodic tagging of the wall with profanity.

“If I’m going to spend money on this wall, I thought it’d be good to honor the history of this block, which is Smokehouse primarily,” Shakaib said. Now, people come from near and far to take pictures in front of it.

Diehard fans of the restaurant have called from other states asking if it can ship ingredients for at-home cooking, a request The Smokehouse is working to be able to fulfill.  And there have been a couple of additions to the menu: the ever-so-trendy Impossible burger and non-dairy shakes. But the vegan burgers that command upwards of $15 at other more upscale local burger joints go for about $6 at The Smokehouse.

“I think there are definitely restaurants that take advantage of something being vegan and behaving as if that’s a premium item they’re offering,” Shakaib said. “But we look at it like, ‘This person just wants a burger that happens to be plant-based,’ so I don’t want to upcharge that person just because it’s the ‘hot thing.’ I want to treat it just how we would treat meat.”

The reality is that the restaurant does pay more for the Impossible meat, but is betting that it can make a profit on the sheer volume of orders – which have consistently gone up month-over-month since reopening, according to Shakaib. “I think it’s wrong for people to upcharge it just because it’s vegan, as if that’s supposed to be something ‘premium,’” he said.

“Some may say it’s unhealthy, but you know, no one’s going to be here to be healthy.” (Shakaib himself said it would be “embarrassing” to reveal how many times he’s had the combination of a cheeseburger, cheese fries and a Coke). Other new embellishments include increased outdoor seating with improved lighting and some kid-friendly outdoor games.

“The unique thing about Smokehouse is that the customer base is as diverse as it can be. That’s No. 1, because we’re open from the morning until late night, but we have all facets of life – construction crews, City of Berkeley staff, and families and stoners,” Shakaib said. “I mean, you’ve got everybody coming here, so definitely want to make the place very friendly towards everyone and very much more open than before the remodel.”

Not everyone has been pleased with the restaurant’s reopening, however. While neighbors largely say they think it’s a positive fixture in the neighborhood, a number expressed concern about a variety of environmental and health issues some say have worsened since the reopening, like additional trash and smoke.

“The issues we’re hearing about … they’re not that new,” Andrew Johnson, president of the Bateman Neighborhood Association, said. “There have been complaints about grease being flushed down the sewer drain, overflowing garbage, and noise, as well as just a lot of smoke in the air for maybe as long as I’ve lived here [since 1993].”

Shakaib acknowledged the complaints are “valid” and said that the restaurant was slow to address them because it was understaffed. He noted that the trash concern, specifically, has been remedied recently with additional pickups.

“It’s hard to find new employees as you’re also running a business, doing payroll and all this – your priorities are mixed up and you forget where you are sometimes. And you forget how to take control of your situation,” he said. “Although I don’t want to excuse myself from it, at the end of the day, it’s a very important concern that has been addressed.”

Seventy years in, The Smokehouse may just be entering its prime as it balances its anachronistic charm with modern necessities. Shakaib is further leaning into the nostalgia with a throwback 1951 prices day in late August, but also plans to launch a revamped website this summer.

“Things are changing at a fast pace. I’m trying to make Smokehouse something that doesn’t change over time,” Shakaib said. “And I think that that is appreciated by [the] community and to come here, many people feel nostalgia because it’s something from the past. And I want to make sure that we cherish that because Smokehouse means so much to many people and I want it to stand against the changing times.”