In West Berkeley, Perfect Day is making dairy products with no cows in sight 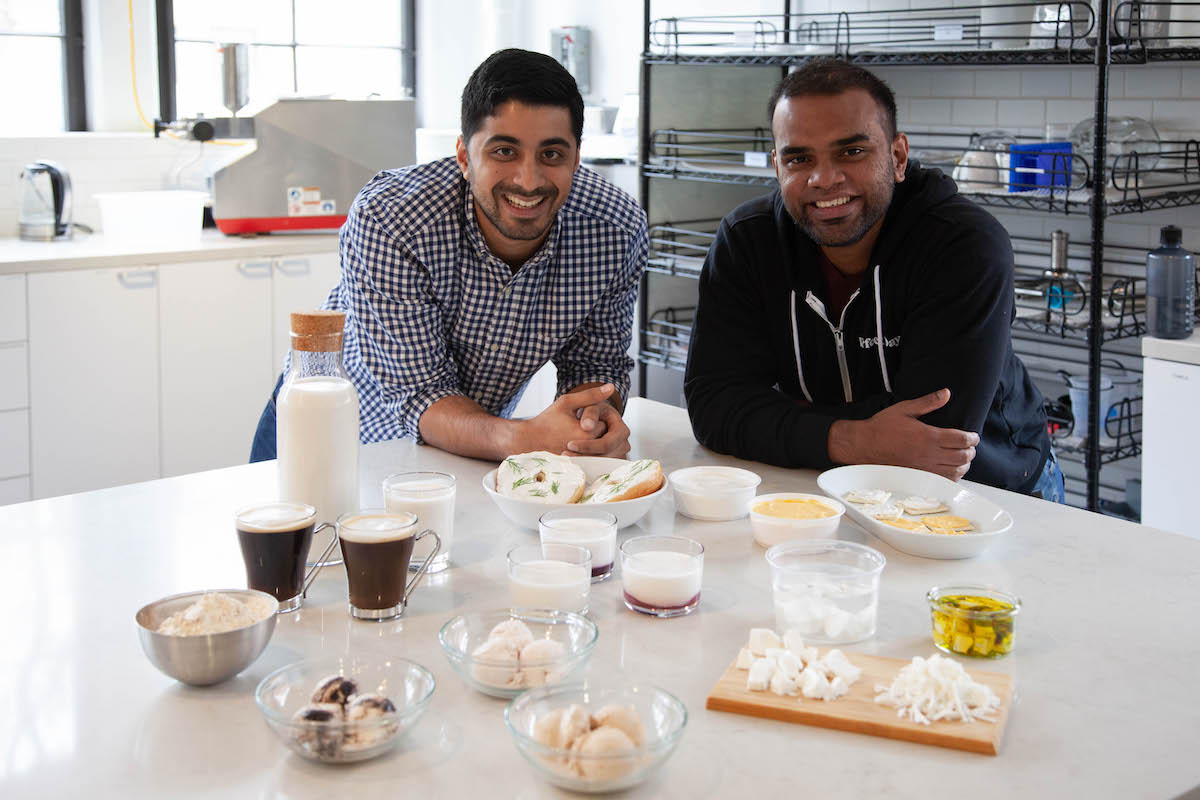 BERKELEYSIDE — Everyone knows where dairy comes from. A cow eats grass, digests it, gets milked and boom – you’ve got something to pour in your coffee.

Well, it turns out it’s not always that simple. At Perfect Day, a food-tech company in West Berkeley, it goes like this: Tiny fungi living in fermentation tanks are given the digital instructions for producing milk protein, the fungi transform sugar into whey protein, the protein is given to manufacturing partners, and you can buy the ice cream at Berkeley Bowl, Cedar Market, Star Grocery and other local grocers.

Welcome to the future of dairy manufacturing, where the dairy aisle is more diverse. Why rejigger something that’s worked for farmers and consumers for millennia? One reason is the impact the traditional dairy-making process has on the environment.

“We ran the numbers, and if we partnered with the dairy industry to use Perfect Day protein in just 5 percent of their products, we’d save 12.3 million metric tons of greenhouse-gas emissions – equivalent to the carbon emitted from every single car registered in the city of Los Angeles,” says Nicki Briggs, Perfect Day’s vice president of corporate communications.

There’s also the fact that many dairy substitutes taste like poor imitations of the real thing, which is actually behind the origins of Perfect Day. A few years ago, co-founders Ryan Pandya and Perumal Gandhi were struggling to find a decent vegan alternative to dairy. “They would open their fridge and it was stacked with all of these plant-based options that were fine, right?” says Briggs. “But it just wasn’t the same thing as stretchy cheese on pizza, or silky yogurt, or creamy ice cream.”

They thought, ‘What is it that makes dairy, dairy?’ The answer they came up with was proteins.

“There are two core milk proteins in milk, a whey and casein. These are the proteins responsible for milk’s functionality, what gives it the mouthfeel and the taste and just the dairy deliciousness,” says Briggs. “It’s kind of a reductionist approach to food, but if we can create milk proteins without any need of cows, we can make everything you love about dairy in a much more sustainable way.”

Perfect Day debuted in West Berkeley in 2014 and has since grown from a group of four to roughly 200 employees worldwide, with an R&D hub in India and a joint lab in Singapore. It recently formed a Sustainability and Health Advisory Council, which includes former U.S. Secretary of Agriculture Ann Veneman and Leonardo DiCaprio, and moved into an even-larger space in Wareham Development’s Aquatic Park Center campus last year.

“Berkeley is just a core hub for innovation, with such incredible access to talent and resources,” Briggs says. Back in 2014, “there were a few other companies thinking about doing similar things around egg proteins not made from chickens and gelatin not having any animal input. All these companies were forming here, so it’s just been an incredible home for us.”

Those who peek inside Perfect Day’s facilities will find tanks full of a fungi called Trichoderma. During World War II, this microorganism impressed soldiers on the Solomon Islands by ravenously eating holes in all their gear. Here, Trichoderma’s talent for energetic consumption and production has been redirected toward making milk – a form of it, anyway.

“The entire genome of the cow has been digitally sequenced, which means that each piece of DNA is available online. We were able to go online and find the corresponding piece of DNA for the whey protein that we produce, get a digital sequence of it, and basically give it to this microflora,” says Briggs.

“When you empower this little microflora, you can put it in a fermentation tank – and we use giant fermentation tanks, think about brewing beer – put in ingredients like sugar, and the microflora eats the sugar and produces a pure whey protein that we filter and essentially get in a powder form. The cool thing about this protein is it’s 100% whey protein and is molecularly identical to the whey protein found in milk.”

Perfect Day partnered with Brave Robot last year to get its first nationally available product to shelves, an ice cream that comes in flavors like Blueberry Pie and PB ‘N Fudge. The frozen treat is labeled “animal-free” because no actual cows were involved, although people with a milk-protein allergy should still avoid it because it does contain actual dairy proteins. (Unlike cow’s milk, it doesn’t have any lactose because the sugar used in making it is plant-based.)

In the coming months Perfect Day will announce a partner for an “animal-free” cream cheese. “It was a really tough product to make because cream cheese is all about texture,” says Briggs. “A plant-based cream cheese is missing the magic of the actual dairy proteins we’ve created. Those milk proteins are doing such heavy lifting in terms of the structure, how it sits on the tongue, and how it melts in the mouth, so it’s been a labor of love to crack the code on that.”

Briggs says her company’s goal isn’t to end animal agriculture, but to give manufacturers that use dairy in their products another alternative. And that’s a huge potential market for Perfect Day, as nearly every aisle in the grocery store includes something that contains milk protein, whether it be snack bars, cake mix, nutrition powder, or salad dressing.

“When we launched, there was already interest in what we were doing. It wasn’t coming just from plant-based or vegan companies – it was coming from giant, multinational food and dairy companies, because they are seeing shifting consumer demands for products that are more sustainable, meeting their needs for health, and more ethically driven and kind to animals.”