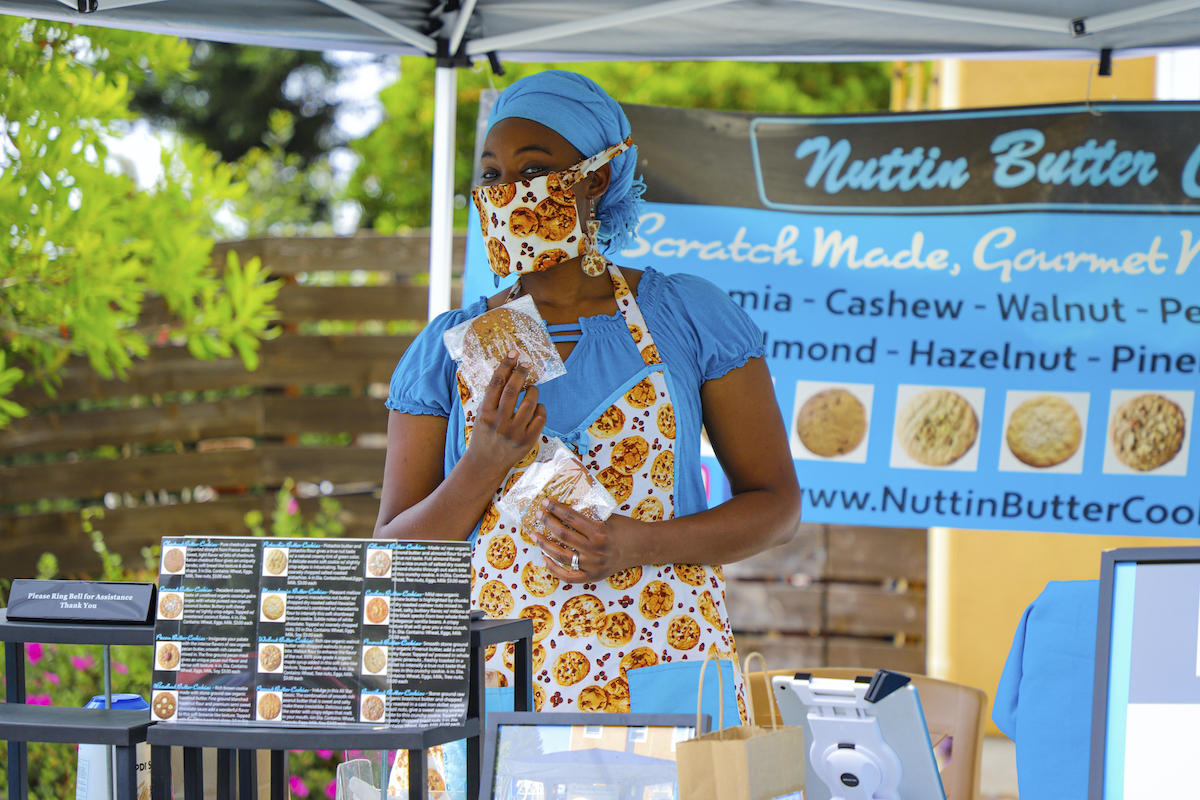 BERKELEYSIDE — When she was just eight years old, Whitney Singletary showed early signs of being an entrepreneur. She had her eye on a water toy shaped like a motorcycle that made revving engine noises and bubbles in the water, but when she asked her mom for it she said no. Rather than pouting, the young Singletary wondered how she could earn the money to buy it herself. She found the answer in a batch of cookies.

Singletary grew up in the kitchen of her grandfather’s restaurant in Bakersfield. Family members would always be there helping out, and whatever they were making, she would be “right there watching and tasting,” she said. Being in the kitchen regularly, Singletary picked up cooking pretty quickly. She made a batch of cookies all by herself and brought them to school.

“I asked the principal if I could sell them after school or during lunch,” she recalled. “He bought one from me and liked it so much that he told the whole staff. My friends didn’t even get to try them because the teachers bought them all.”

She raised enough money to buy the toy, and over the years, she continued to bake whenever she needed spending money.  Years later, as an adult, she turned her childhood pastime into a career.

In 2015, Singletary had a dream in which she saw into her future: She was an entrepreneur selling baked goods.

“It was just clear that I needed to start this now,” she said about that moment in her life. “So I went into the kitchen.”

Singletary started Nuttin’ Butter Cookies in 2016. She got a cottage license to bake out of her home kitchen, then set up a booth to sell her cookies in front of her house on Dwight Way in Berkeley.

She realized she needed a unique specialty for her mission “to be the gas station in the middle of the desert, where people have no choice but to get it from me, because you can’t get it anywhere else for miles.”

Again, she found inspiration in her family roots. When Singletary was growing up, her family made a particular kind of peanut butter cookie; they were a staple at family gatherings. The original recipe came from her grandfather’s great-grandma. Singletary believes it dates back to 1850.

“It was so from scratch, that you would start by pulling up your peanuts, cleaning them, roasting them, grinding them, and then churning some butter,” she said. “Over the years, my great aunt condensed it to ‘buy some butter,’ but I remember these stories being told to me.”

To make it her own, she began swapping out different nut butters for the peanut butter, including cashew butter, a favorite food of one of her sons.

Her early experimentations were a disaster, she said, as the oil content in nuts differs so widely. But eventually, she came up with unique recipes for each version of the cookie, tinkering with them until their textures and flavors were just right.

The cookies satisfied her “gas station in the desert” concept — no one else was selling such a wide array of nut butter cookies. But wasn’t it risky to base a company on nut butter cookies when nut allergies are so prevalent now? Not so, said Singletary.

“Only 2% of the population are allergic to nuts,” she said. “So that leaves 98% of people who can eat them.”

Nuttin’ Butter Cookies offers a total of 12 different cookies. If you can think of a type of nut that comes in nut butter form, chances are high she has a cookie made with it. In addition to the obvious ones, like almond, walnut and pecan, she has pistachio, hazelnut, Brazil nut and pine nut varieties too. Singletary she also has one with ground sesame seeds and one with no nuts at all, just regular butter, and has two more flavors coming soon.

For Nuttin’ Butter’s peanut butter cookies, Singletary turns to the family recipe (changing it is non-negotiable for her, she said), which uses Jif brand peanut butter, but all her other varieties are made with organic nut butters. Singletary strives to use other organic ingredients too, but with the size of her operation, her eggs and butter come from local supermarkets, so she’s limited by what’s in stock during the pandemic, she said.

Her journey running Nuttin’ Butter hasn’t been without its challenges, even before the coronavirus crisis.

During her first year of business, Singletary moved into an apartment complex that was supposed to be a non-smoking building. It turned out the other tenants smoked constantly, which aggravated Singletary’s asthma. When she complained to the landlord, the tenants assaulted her for being a “snitch,” she said. The attack landed her in the hospital with a concussion and a fractured hand; it was four months before she could bake again. Also, she would eventually lose some of the use of her left hand from a poorly-given flu shot.

In 2016, she moved into her house on Dwight Way and applied for a small business loan. The loan officers were encouraging on the phone, but changed their tune when they met her in person, a common occurrence that Black entrepreneurs face, she said.

But rather than discourage her, it had the opposite effect.

“I’m a Leo,” Singletary explained. “You can’t tell me ‘no’ when my mind is set on something. I’m persistently stubborn.”

After getting her cottage license, she began selling her cookies from her driveway, putting as much profit as she could toward new equipment, growing her business one bowl and sheet pan at a time.

Singletary did try finding a commercial kitchen space, so she could sell her cookies in stores, but every local kitchen she found had a no peanut rule. Many are also wheat-free, which also excluded her.

Trying to find a storefront to sell her cookies also proved to be challenging. As a new business owner, one landlord requested proof of six months of rent in her bank account in case her business failed. She didn’t have it.

Eventually, Singletary did find a landlord that would rent a storefront to her. She started selling Nuttin’ Butter Cookies at 2521 San Pablo Ave. in September 2019, but when the pandemic started, she decided selling in her driveway would be safer, as she still bakes the cookies in her home kitchen. Unfortunately, she still has to pay rent on the San Pablo storefront until her lease is up in a few months.

“It’s definitely a challenge, especially with all the outside elements,” she said of her driveway booth set-up. “Even with wind, rain and hail, I’ve been out there. I’m like the post office.”

Some of her customers pre-order online for pickup or delivery; some just stop and choose from whatever she has at her booth. Sometimes, her mother or her sons help with the business. On a good day, she can sell up to 300 cookies.

While she’s faced many roadblocks, many stemming from racial discrimination, Singletary has found support from unexpected places.

One night, she braced herself as a policeman approached her booth. Someone had reported her, thinking her cookie sales were illegal.

“He sat in his car and examined it, and I thought ‘Weirdo,’” she said. “After he ate it, he came back and shook my hand and said ‘You’ve got yourself a new customer for life.’”

Just as her elementary school principal told all the teachers about her cookies all those years ago, the cop told all of his fellow officers. And now, even firefighters buy cookies from her these days. Given that she’s often selling cookies until 8 p.m. or so, she’s glad to have the police stopping by, not only to buy cookies but to check up on her, too.

Nuttin’ Butter Cookies is open 1-8 p.m., Monday through Friday. Cookies can be pre-ordered online for pickup or free local delivery of orders over $24.