West Berkeley makers do it all, from age-old crafts to 21st-century innovation 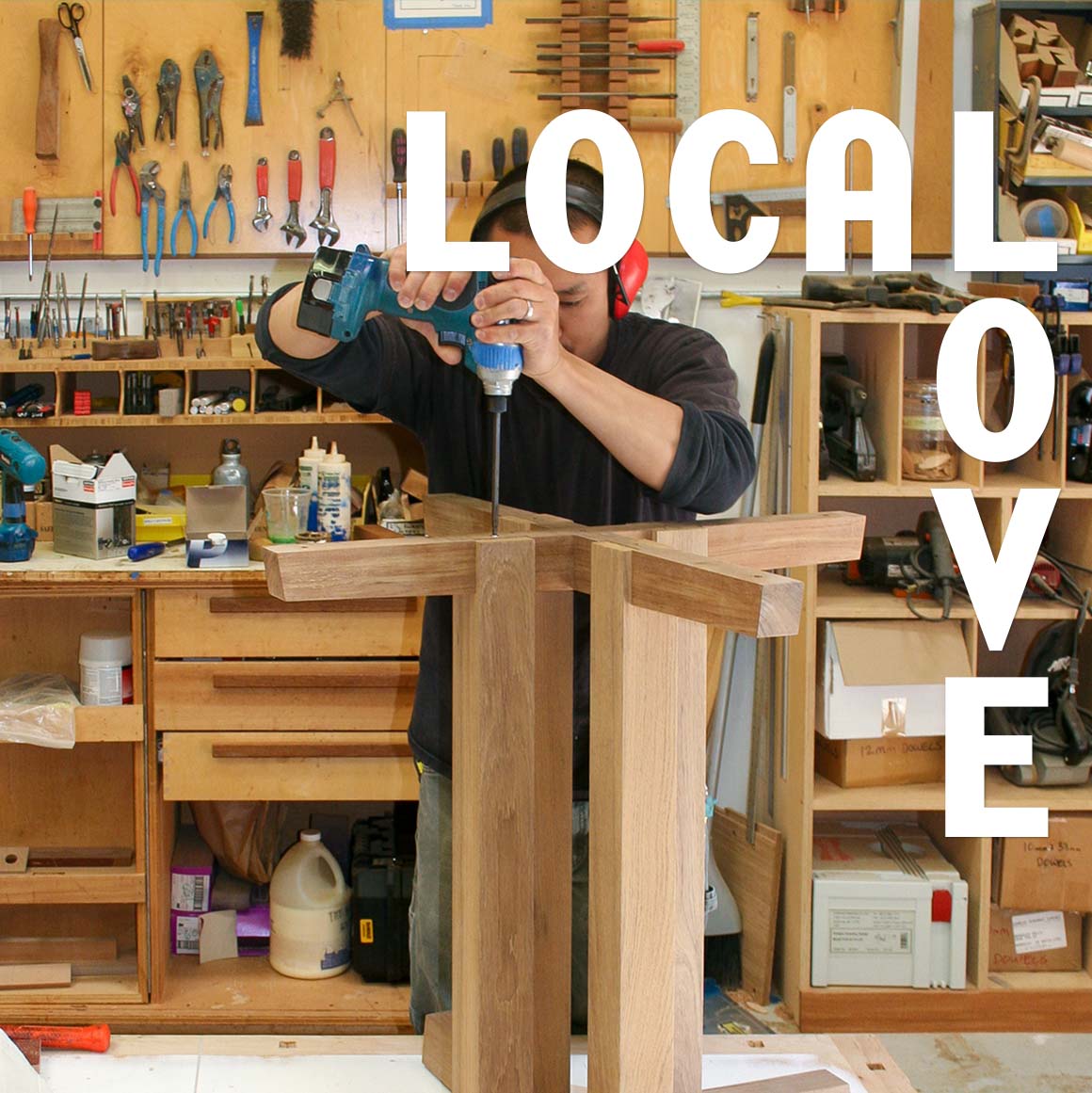 BERKELEYSIDE — The city’s manufacturing ranges from woodworking to wine-making, and from pouring metals to molding new materials.

Gene Agress built his Berkeley woodworking career from the ground up, literally. In the 1970s he’d spot scraps of wood on the ground, whittle them into toys, and his company would sell them in public spaces on Telegraph Avenue.

“Within five years we started making cabinetry and pieces of furniture,” he recalls, “because people would ask us to make other things, and I’d always say ‘yes’.”

Today, Agress is the CEO of Berkeley Mills, a fine-arts woodshop on Seventh Street in West Berkeley.  He employs dozens of artisans who have made custom cabinets, furniture and architectural elements for about 7,000 Berkeley customers and more nationwide. It’s been a long journey, and one that he and co-founder Dave Kent are proud of.

“What I love about Berkeley is that it has the highest-quality manufacturers of probably anywhere in the world,” Agress says. “We certainly are as good as anybody in Switzerland, France, Germany or Italy. And we can get anything we want to go along with our work — metalwork, beautiful stained-glass windows, anything you can possibly imagine — done here in Berkeley or Oakland.”

More than 100 manufacturers call West Berkeley home, pumping out everything from bronze sculptures to craft beer, to chocolate, to gizmos destined for the freezing vacuum of outer space. In honor of this year’s Bay Area Manufacturing Week Oct. 1-8 — which the City of Berkeley Office of Economic Development is celebrating with a series of events — several longtime manufacturers opened up about their unique products and what makes working in West Berkeley exciting.

Many of the neighborhood’s makers transform natural materials into high-quality, upscale goods.  Berkeley Mills uses sustainably harvested wood and an uncompromising, time-tested woodworking technique known as mortise-and-tenon joinery. “My philosophy is, in order not to exploit the forests, we have to build things [that last] longer than the time it takes a tree to grow,” Agress says.

Berkeley Mills is just one of many Berkeley businesses where people practice trades dating back thousands of years. At the Artworks Foundry on Heinz Avenue, artisans employ the lost-wax method of bronze casting to make monuments and fine-art sculptures for locales as far-ranging as Guam, the National Mall, and the San Diego Zoo (home to the “largest cantilever bronze animal statue in the world”).

“You could take a Roman artist, put them in the foundry today, and they’d recognize most of the techniques we use,” says Julian Mussi, who owns the business along with partner Kambiz Mehrafshani. “That said, our industry is being transformed by new technologies like 3D scanning and 3D printing, and we’re making a pretty big commitment over the next couple of years to expand our capabilities in terms of the digital tools we’re bringing on board.”

Cinema fans might be interested to know that Artworks Foundry helped create sculptures featured in Searching for Bobby Fischer and Rocky III, the latter of which has a cult following and stands beside the famous “Rocky steps” in Philadelphia. The foundry has also worked with many famed California sculptors, including Bruce Beasley and the late Stephen De Staebler.

Arris Composites dabbles in a more modern kind of manufacturing: It leverages advanced composites with a proprietary technology called Additive Molding that CEO and founder Ethan Escowitz developed in his garage on Bonar Street. This technology is used to produce high-performing, lighter-weight parts that wind up in consumer products, such as CES award-winning drones and transportation structures that reduce weight and (by association) a small percentage of greenhouse-gas emissions.

Arris Composites, which is a finalist in this month’s East Bay Innovation Awards, was founded in 2017 and now employs more than 150 people here and in Taiwan. Escowitz credits that explosive growth to the Bay Area’s talent pool and Berkeley’s strategic location as a transportation crossroads for those commuting from all over the region.

“You can draw a mile radius from where we started — we went to one building, then grew to another, and another,” says Escowitz, who now oversees four local buildings. “We were able to accommodate the growth from garage to a real substantial player on the global-manufacturing scene, all in West Berkeley.”

As it happens, Berkeley’s burgeoning wine industry can be found just 2 miles north in the Gilman District. At Donkey & Goat, winemakers source grapes from small, organic farms to make natural wines low in sulfur content and high in flavor. This August, Wine & Spirits honored the outfit for the second time as one of the top 100 wineries in the world.

“Donkey & Goat celebrates our small farmers — we work together to farm microbes that create a healthy soil biome to grow our plants,” says co-owner Tracey Brandt. “We then take the fruit of our labors into our cellar and work with the raw material in a way that is simple and not meant to hide the beautiful bounty nature provided.”

This has been a daunting year for Donkey & Goat because the Caldor Fire ruined vast amounts of their El Dorado County yield. Grapes had to be harvested early, often unripe, and laboriously hand-washed to remove the flavor of smoke. Brandt said that one day she might follow the trend of blending juice from grapes with juice from pears or apples to make fruit wine like Moonland or Buddy Buddy, being made at Vinca Minor behind Donkey & Goat.  She urges consumers to support neighborhood businesses in these trying times.

“Berkeley residents should consider how to spend their dollars as locally as possible to ensure makers remain in Berkeley for years to come,” she says.

Covenant Wines relocated from Napa Valley in 2014 specifically to become one such local maker. “Berkeley offered us a really attractive financial option,” says Jeff Morgan, founding winemaker and co-owner. “It’s very business friendly and we were able to get a permit in the industrial area to build a winery within 10 minutes. In Napa Valley, it would take me three years.”

After retrofitting an old cement-tabletop factory into an urban winery, Morgan — along with his wife, Jodie Morgan, and winemaker Jonathan Hajdu —  have become big names in the world of organic vintages based on indigenous yeast, which people can find at shops like Vintage Berkeley and both Berkeley Bowls.  Their wines are also kosher, and Covenant has a sister operation in Israel.

“We’ve really seen a wonderful industrial gentrification occur in our neighborhood,” Morgan says. “Empty warehouses have become filled with breweries, wineries and artist centers, and across the street we have Urban Adamah, the organic farm and Jewish cultural center. Most everybody here is manufacturing or farming or producing something.”

The production of alcoholic beverages — one of the few Berkeley industries that, perhaps not surprisingly, has seen good sales during the pandemic — is not the domain of Gilman District vintners alone. Southwest Berkeley also has its share of this growing segment of manufacturing. The Rare Barrel, for example, is a brewery that specializes in sour fruit beers aged in oak barrels, like this year’s raspberry/Meyer lemon brew (“Ladybirds & The Bees”) inspired by refreshing pink lemonade.

“This summer we joked that we were a fruit-processing company, because we were bringing in tons of strawberries, apriums, and pluots every couple of weeks. It’s going to be an exciting time in the next few months when all these fruit beers get released,” says co-founder Alex Wallash.

Wallash and his partners established The Rare Barrel in West Berkeley because they wanted to put down roots in the Bay Area. Today they’re sticking around partly due to the climate — their warehouse naturally holds the right temperature range for brewing, year-round.

“One of our neighbors is making instruments that are sent up on satellites. It’s cool to be a brewery and then your neighbor right next door is sending stuff to outer space – awesome!”