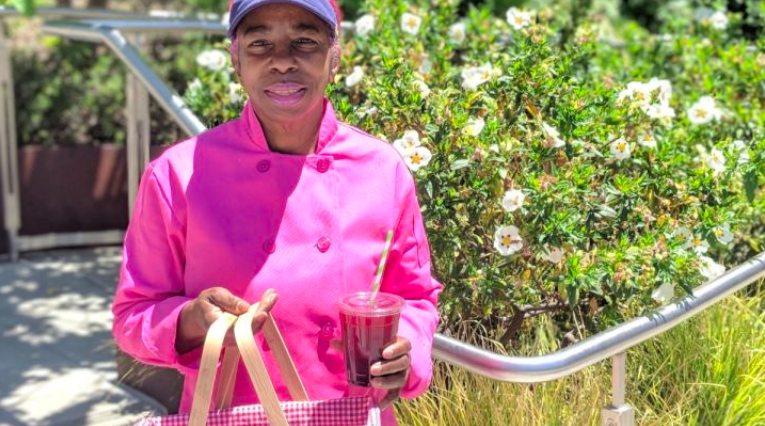 BERKELEYSIDE — After undergoing two surgeries and facing eight months of chemotherapy ahead of her, Bernadine “Pinky” Sewell, founder of Pinky & Red’s, misses her community at UC Berkeley. Her business on the Cal campus closed in March, when the university shut down due to COVID-19, and her lease officially ended in May.

Then in August, Sewell was diagnosed with colon cancer. She started a GoFundMe campaign to raise money to pay for medical costs while her restaurant remains closed. So far, she’s raised about $38,000 of her $250,000 goal. Her two adult sons, King and Luciano, take care of her in between working their own jobs.

“It’s such an educational journey learning about the body — how it functions,” said Sewell, who also goes by the nickname Pinky Winchester, a nod to her dyed pink hair and her mother’s maiden name, Winchester. “And you know, after having part of the colon removed, I’ve learned that you take your water for granted.”

Pinky & Red’s was located at UC Berkeley’s MLK Student Union. It was initially part of La Cocina Cantina, a residency featuring five kiosks owned and operated by a group of chefs who graduated from the incubator kitchen program that primarily serves women of color and immigrant entrepreneurs. Sewell and her daughter, Sicily Johnson — La Cocina alumnae — opened Pinky & Red’s in 2018.

The kiosk attracted hungry students with its satisfying eats, like its fried chicken sandwich, made with halal chicken, and the “Hangover,” a breakfast sandwich consisting of two fried eggs, bacon, arugula and tomato.

While her own diet has had to change due to cancer, Sewell still gets excited when she describes her food, like fried macaroni and cheese kale balls on top of a burger and her Cranblueberry Lemonade. Her recipes are inspired by her roots — starting from her six-times-great-grandfather, who was enslaved and worked on a plantation in Tennessee, and through her upbringing in Detroit, Michigan.

Sewell moved to the Bay Area in 2015 to be closer to her children, but she still thinks fondly of time spent in the kitchen, growing up in the ’60s in Detroit. Her father taught her how to blend the spices she uses in her dishes. And she often cooked and listened to Motown music with her great-grandmother, Mama Annie.

She wanted to bring that feeling of home to Pinky & Red’s. At her kiosk, she displayed a record player for students to keep the music going while they waited for their orders. Customers could also keep themselves occupied by taking part in another tradition — adding their name or writing a message on Pinky & Red’s wall.

Her family’s welcoming ways inspired how she ran the business. “My household was a household where my brothers always brought somebody home who had nowhere to go,” she said. “Everybody knew if you didn’t have any food, they could always come to our house and that’s just something that I grew up with and I’ll just never forget.”

Sewell carried her family’s torch of feeding those in need by nourishing students who didn’t have the funds to pay for meals. To reduce their embarrassment, Sewell would give students a $5 gift card to supplement their purchase. In addition, Pinky & Reds fed local unhoused communities and regularly donated leftovers to the UC Berkeley Food Pantry.

“The food insecurity on the campus was unbelievable,” said Sewell, who realized the extent of the issue when she co-hosted Thanksgiving dinner in 2018 for about 100 Cal students and staff. “When we did the Thanksgiving meal, it was more Berkeley employees than students that showed up. They didn’t have food or anywhere to go.”

The feelings of empathy and generosity between Sewell and Cal’s student body and staff were mutual. In 2018, Pinky & Red’s was facing eviction from her space. Cal Black Student Union (BSU) and staff circulated a petition to save Pinky & Reds from being evicted. Sewell said the university attempted to push her to share the space with UC Berkeley Student Food Collective during the upcoming spring semester, or else have to vacate.

“It was devastating,” she said. “You spend all your life to get to this point and you get it. Then for someone to just to walk up to the counter and tell you I’m coming to take this from you”.

The petition collected 1,900 signatures, and the ASUC Student Union board held a vote to decide on Pinky & Red’s future. Sewell recalled that many people advocated on her behalf. “I remember one Black guy saying, ‘How are you gonna kick the Black business out of the MLK building? That in itself just sounds wrong.’”

The board said there was a misunderstanding regarding the allocation of the space. After the Student Food Collective withdrew its bid for the kiosk, the board voted to keep Pinky & Red’s at the student union. Sewell felt vindicated, especially after the hard-won fight for her restaurant was followed by Pinky & Red’s taking second place in Bay Area New Group’s 2019 bracket-style competition for the Bay Area’s best fried chicken sandwich.

Now, Sewell is fighting again, but to keep herself financially secure while the restaurant — her sole source of income — nears a year of being on hiatus and no longer has a home. Pinky & Red’s received a small business grant as part of the Save Small Business Initiative, however Sewell said she didn’t qualify for the Paycheck Protection Program (PPP) because she “wasn’t credit worthy.”

Sewell says the students who fought for her keep her spirits uplifted; she refers to her relationship with them as “a love affair.”

“I have awesome volunteers who are still rooting and believing. It’s a lot of people who truly do believe in Pinky & Reds,” Sewell said.

Still, the cancer has taken a toll on Sewell’s energy. She’s nervous about her upcoming chemotherapy sessions, which start this week, and has been resting as much as she can and trying to remain positive.

“There’s a difference between changing and being a change. This is not in my control, what I’m experiencing. But all I can do is to be the best me that I can as I go through it” said Sewell. The funds collected from her GoFundMe campaign will help minimize some of the financial woes that come with all the medical and household bills, as well as medical supplies and medications she must purchase.

Despite the difficult days ahead, Sewell is looking forward to the future. When she recovers and has the strength, she plans to sell her own blend of coffee and seasonings online. At this time, she is unsure if she’ll have the means to reopen Pinky & Red’s or if she’ll get a new lease at UC Berkeley.

Through everything she has been through, she believes she was meant to serve as a beacon of hope for others and has learned so much about herself during the process.

“What I’ve learned is the things you go through, sometimes they’re not for you.”