Healthy foods made in Berkeley build immunity — and community 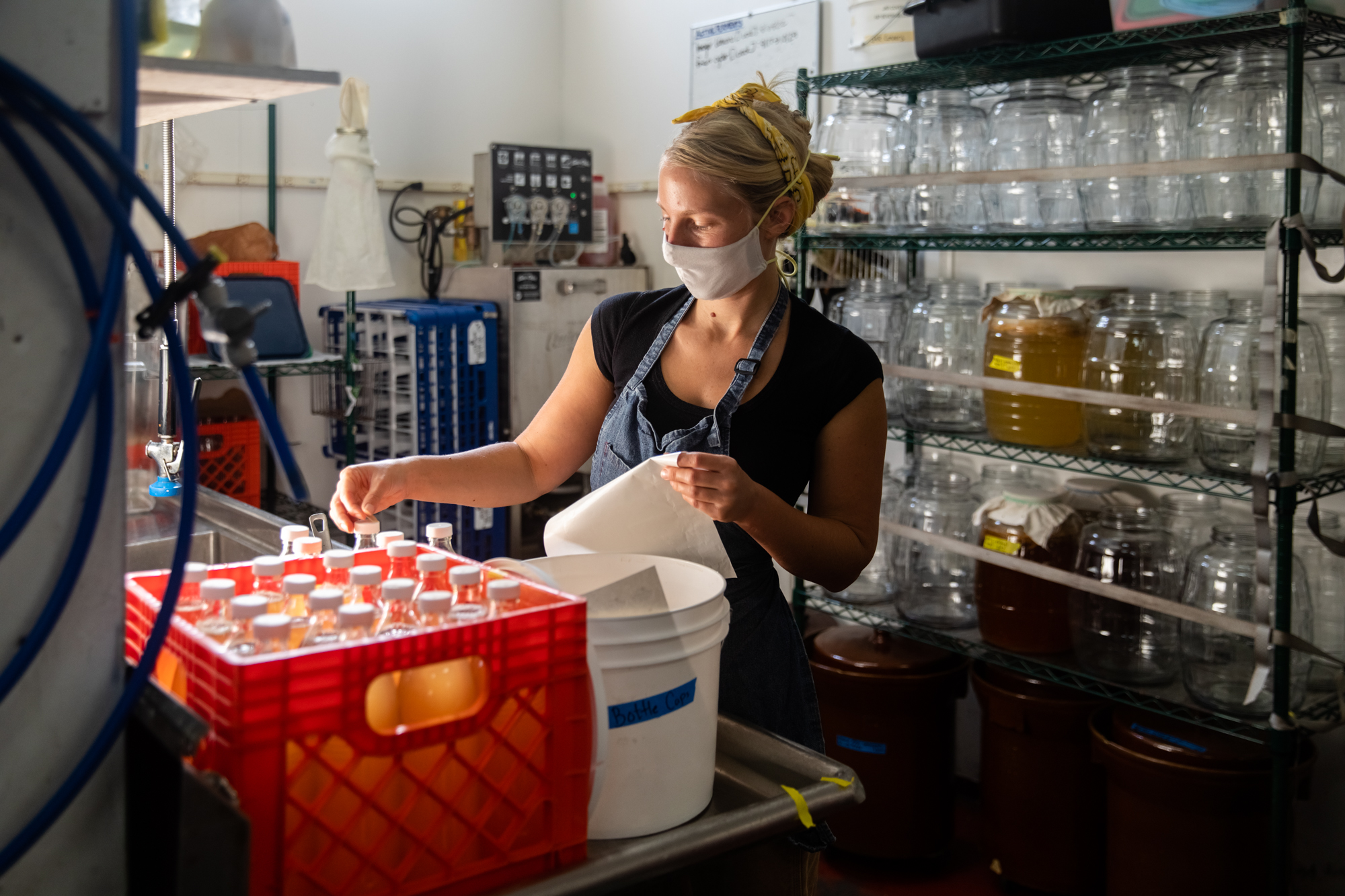 BERKELEYSIDE — Eat real food. The advice is simple, and it’s become more important than ever as people work to protect their minds and bodies from the impacts of COVID-19. According to recommendations from the Harvard Medical School, eating healthy food can bolster your immune system and reduce anxiety.

“Food really is medicine to us,” said Mud Hut, a long-time worker-owner at Three Stone Hearth community kitchen. Everything that Three Stone Hearth makes — from its cultured condiments to its old-fashioned sauerkraut — is made intentionally, with the health of its customers in mind.

And Three Stone Hearth is just one of a host of Berkeley makers and bakers who provide customers with nourishing meals and are at the forefront of the real food movement that focuses on the natural purity and health benefits of eating healthy, wholesome foods that are grown or raised.

The back room at Three Stone Hearth is a labyrinth of oversized jars, refrigerators and tubs on wheels. Worker-owners at the cooperative use this space to process huge batches of food using traditional methods like fermentation, soaking and sprouting. The outcome is a wall of glass jars filled with spring white and red kimchi, a cornucopia of sauerkraut and pickles, and cultured drinks with names like Korean licorice mint jasmine kombucha and Shiso Stone Fruit Shrub. Workers boil thousands of animal bones each week to make nutritious chicken and beef bone broths, which they sell unadulterated or infused with herbs and vegetables. Customers can order a seasonally adjusted menu of prepared foods  online for on-site pickup or home delivery —and Berkeley residents even pay a discounted delivery fee.

“I’d say there are three components that give our foods their power. The naturally and ethically sourced ingredients, the traditional preparation techniques and the spirit in which we make them,” said Mud Hut.

Since its founding in 2006, Three Stone Hearth has rooted its philosophy in the health benefits of traditional food, inspired by researchers who studied the diets of indigenous people around the world. Many of its customers are referred by their health care practitioner, Mud Hut said, “which speaks to how seriously they, and we, take our commitment to food as medicine.”

“When I see the gratitude from our customers, people who are struggling with chronic illness, digestive distress and compromised immune systems, who are recovering from surgery or cancer, my heart just bursts. I feel so proud and grateful to be providing these foods,” said Danielle Deibert, another long-time worker-owner. “They come in and say, ‘You’ve saved my life! Thank goodness you’re back!’”.

“The idea was that if food tastes good, it’s probably not good for you,” Mud Hut said. Three Stone Hearth’s founders wanted something different — delicious food that was also good for you. They also sell food products made locally by companies that share their values. Among them are Morell’s Bread, Ancient Organics, Cult Crackers and Bread SRSLY.

One of the tenets of traditional cooking is that food should include healthy fats. With this in mind, Ancient Organics produces ghee, a healthy fat, from locally sourced milk. The product is rooted in the owners’ Ayurvedic practice, which emphasizes the role that balance plays in health.

“With Americans continuing to have the highest obesity and diabetes rates, we are clearly not in balance with our relationship to what we eat,” said Matteo Girard Maxon, co-founder of Ancient Organics. “Finding the right food combination for your individual constitution is a fundamental tenet of Ayurveda. One of the core elements of this food foundation is healthy fat. Our ancestors have known this and we are now just coming out of a dark age regarding the importance of full fat in our diet.”

Also sharing the idea that food should nourish is Cult Crackers, a woman-owned business that produces organic, nutrient-dense crackers inspired by a Swedish recipe. When co-owner Brigitta Durrell found something she could get her picky daughter to snack on (and that also generated compliments from strangers), she teamed up with Dianna Dar, another parent at her daughter’s school, to start a business.

The women started with a classic seed cracker, made from corn meal, corn flour and a combination of six seeds — sesame, sunflower, pumpkin, chia, hemp, and flax. “We feel good that we’re providing something healthy, an alternative snack,” Durrell said. “There’s 20 grams of protein in every bag.  We hand-bake all the crackers in small batches.”

The pair started selling at local favorites like Three Stone Hearth, Berkeley Natural Grocery, and Berkeley Bowl; now, you can find the crackers in over 100 stores across the country. Though they have expanded beyond Berkeley, the women are grateful for and rooted in the community here.

“I don’t think we could have done this anywhere but in Berkeley. The community has really embraced us,” Dar said. “It’s been rewarding for our families, too. It’s important for our teenage daughters to see their moms being passionate about something and working hard to achieve it.”

Cult Crackers is based out of Berkeley Kitchens, which creates a community of small food producers. Down the hall from the cracker production company is Bread SRSLY, which produces gluten-free, vegan bread that is safe for people with Celiac disease to eat. Like these other makers, the small business puts nutrition over profit.

“The wild fermentation we use helps break down tough grains to make a loaf of bread that’s easy to digest and full of nutrients,” said Sadie Scheffer, who founded Bread SRSLY in 2011.

When Scheffer started baking gluten-free bread, she was on a mission to make a delicious bread that was safe for people with food sensitivities. She succeeded — not only in crafting a tasty loaf, but in winning over her now-husband and SRSLY facilities manager. For its first two years, Bread SRSLY delivered all its bread by bicycle. The practice ended after the business expanded to include online orders from far away, but its local spirit remains.

Rounding out the healthy food makers at Berkeley Kitchens is Morell’s Bread, a mainstay of Berkeley’s real food movement for two decades. Together with two part-time employees and his wife Tamsen Fynn, Eduardo Morell bakes 700 loaves of organic sourdough bread each week, which he sells at Monterey Market, the Berkeley Farmers Market, and from his own bakery. He has been baking for Berkeley since 2002, when he first started selling bread at the farmers market after learning his craft as an intern with Three Stone Hearth co-founder Jessica Prentice. From the beginning, Morell has been intentional about what goes into his bread.

Over half of Morell’s loaves are 100% whole-grain, and the rest are at least 50% whole-grain. The reasons, Morell said, are taste and nutrition. “When I first discovered sourdough artisan-style bread, I was struck by the flavor,” Morell recalls. “I found out later in life that whole wheat is packed with a whole bunch of nutrients and can open up new doors for folks who otherwise couldn’t eat bread due to dietary restrictions.”

Having sold bread in Berkeley for so long, Morell also sees his business as a community affair. “People feel that our bread is essential to their lives and families. I’ve watched customers go from elementary school all the way to college. And the pandemic has ushered in a new crop of buyers.”

The increased attention on food and health during the pandemic has revitalized an old tradition — coming together around food, bought from artisans or made at home.

The pandemic-induced shelter in place has inspired not only a bread craze, but a renewed interest in making food at home. Morell hopes by providing sourdough starters, his business can keep pace with demand and give people the tools they need to make their own healthy food at home.

Chef Olive and Nutrition Consultant Lisa Miller, co-owners of Kitchen on Fire, also share this devotion to nutritious food and desire to educate the community about cooking’s relationship to health. They explain, “Nutrition education is an essential part of our mission … As a family and as educators, we believe in nurturing our bodies with the best food possible and taking advantage of the abundance of local, seasonal produce available in our community.” Since the pandemic, Kitchen on Fire has shifted to provide virtual hands-on cooking classes and events and now offers personal chef services, nutrition classes, and private nutrition consultations.

The increased attention on food and health during the pandemic has revitalized an old tradition — coming together around food, purchased from artisans or made at home. Girard Maxon sees the silver lining: “Taking time to slow down and celebrate with a nourishing dish is fundamental to wellbeing, something that is much needed in the current dynamics we face.” Morell agrees, “It’s nice to be part of people’s lives that way, to have a community that’s centered around food.”